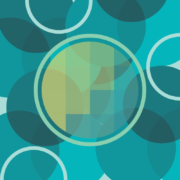 Support the Australian BPD Foundation to “Increase Medicare-funded visits for BPD and other complex mental health conditions”. The most effective and lasting treatment for BPD is at least one year of regular visits with a qualified mental health professional but the Medicare-funded Better Access to Mental Health Professionals initiative can only fund up to 10 visits each year.  This clearly falls short of the long-term treatment needed for a complex disorder like BPD. Sign this petition to Greg Hunt, Federal Minister for Health, to help increase the number of funded visits covered by the Medicare-funded Better Access for treating BPD and other complex mental health conditions from 10 to 40. 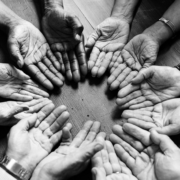 One of the myths about BPD is that it is untreatable, but the latest research shows evidence-based treatments are highly effective and improving.

Awareness of mental health issues and receiving the correct diagnosis allows beginning the process to seek appropriate information and support. From here on, greater insight into BPD leads to understanding the origins of thoughts and behaviours, being aware of these functions, having the ability to communicate these inner thoughts and feelings and request for help, and eventually having the confidence to appropriately respond in an emotionally regulated manner.

The most important component to learning to cope well with BPD symptoms is identifying the issues and the active willingness to change unwanted behavioural responses. Evidence shows that the desire for meaningful roles, education and work, and the motivation to not be defeated by the disorder are key to recovery. Engaging in focused routine activities such as completing daily tasks, education, developing a career, attending therapy, and engaging in physical activity or meditation, can help change and provide a sense of achievement and completeness.

BPD is a disorder that impacts on interpersonal relationships and a supportive network of family, friends, and carers is highly beneficial to the recovery of the individual experiencing BPD symptoms. Misinterpretations of behavioural responses from the support network can worsen the stigma felt by the individual suffering from BPD and their perception of self. Research suggests that it is necessary for loved ones of people with BPD to also be educated on the disorder and appropriate coping strategies so that behaviours are understood and the individual can be well-supported to practice positive thinking patterns.

Depending on whether there are co-occurring mental illnesses, an expert team of collaborating psychiatrists, psychologists and carers may be required to tailor a combined strategy involving psychotherapy and pharmacotherapy. As evidence shows that effective treatment of BPD requires continuous psychotherapy for at least 12 months, it is very important that there is a trusting and healthy patient-therapist relationship as health professionals not only guide therapy but also relied on as part of support network, especially during crises.

Proven therapies effective for BPD treatment such as Dialectical Behavioural Therapy involve working through thought practices and mindful activities so that such strategies can be utilised in distressing situations.

FYY Ng, ME Bourke, and BFS Grenyer, ‘ Recovery from Borderline Personality Disorder: A Systematic Review of the Perspectives of Consumers, Clinicians, Family and Carers’, vol. 11, no. 8, pp. e0160515. 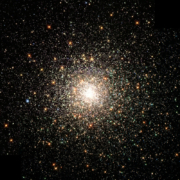 We believe listening to stories and voices from people living with BPD is one of the best ways to understanding mental health problems and break down stereotypes. It is also a great avenue for those affected by BPD to relate with others around in a supportive online community. Click here to see a collection of videos, blogs, and podcasts shared by those learning to manage living with BPD symptoms. 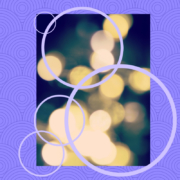 The common symptoms of BPD mimic or overlap those of other mental illnesses – and, as is the case with any mental illness, those with BPD may even have one or more related conditions.

The co-existence of mental illnesses with BPD affects the course of BPD. Although more acute crises need to be treated first with a combination of medication and therapy. Unfortunately, it is often that symptoms of other illnesses “hide” the BPD symptoms, so are more easily recognised and more regularly treated whereas the BPD symptoms go undiagnosed and untreated. Patients with both a personality disorder and another diagnosed mental illness have poorer responses to treatment than those with one disorder. Fortunately, research shows that with the support of a skilled team, patients with BPD and co-occurring disorders see improvement to symptoms when treated holistically rather than solely for the more obvious mental health conditions. Therefore it is important that BPD is recognised with other mental disorders.

Mood disorders occur in more than 90% of people with BPD.

Anxiety disorders occur in about 88% of people with BPD.

There are several anxiety disorders that can co-occur with BPD: panic disorder, phobias, obsessive compulsive disorder, social anxiety disorder, agoraphobia and separation anxiety. The rates for co-occurrence vary among the anxiety disorders and studies have shown that evidence-based psychotherapies such as Dialectical Behaviour Therapy in combination with Cognitive Behavioural Therapy would be useful. Pharmacological strategies are not recommended for BPD but may be of short-term relief for anxiety disorder symptoms.

Substance use disorder occurs in about 45% of people with BPD

Substance Abuse and Mental Health Services Administration, ‘An Introduction to Co-Occurring Borderline Personality Disorder and Substance Use Disorders’, vol. 8, no. 3, 2014.

Posttraumatic disorder occurs in about 33-79% of people with BPD.

Both BPD and PTSD have both been found to stem from the experience of traumatic events. In fact, people with both BPD and PTSD report earlier experience of trauma as compared to people with just PTSD. Some of the overlapping symptoms of BPD and PTSD include: anger, emotional regulation problems, mood swings, fear of abandonment and dissociation. Recommended treatment is only evidence-based psychotherapies such as a combination of Dialectical Behavioural Therapy and Cognitive Behaviour Therapy.

Eating disorders occurs in more than 20% of people with BPD.

Bulimia co-exists in 26% cases of BPD and anorexia nervosa co-occurs in 21% of individuals with BPD. Serious weight loss from an eating disorder should be treated before therapy targeted for BPD. Binging and purging behaviours of eating disorders can be focused similarly as for impulsive behaviours targeted in specialised psychotherapies for BPD.

Borderline in the ACT – Co-occurring disorders 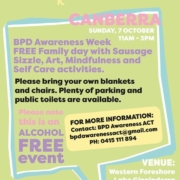 Supporting someone with BPD can sometimes be distressing and difficult. It can seem like nothing is changing. If you are a loved one of someone with BPD, check out borderineintheACT.org.au ‘Family, friends and carers’ for information about helping someone with BPD and looking after yourself. Look out for more posts today focused on ACT local programs for supporters of those living with BPD.

If you love and/or care for someone with BPD, you are welcome to the free ACT BPD Carer Support Group to meet others who share a similar journey. It is a safe place for support and to learn coping strategies from others and professionals. Meetings are held on the first Monday of each month in Holt, Canberra at 5.30-7.30pm. Contact Natalie by email or 0415 111 894 or Fi by email or 0448 556 698. Details

Family Connections is a free 12-week program providing education, skills training and support for people supporting a person who experiences BPD symptoms. Meetings are held on Wednesdays at 3.00-5.00pm. For more information about the program click here, and to register click here.

Mental Health First Aid Courses are held in Canberra throughout the year. Although not BPD specific, completing this 4-hour course can assist loved ones and carers of people with BPD in responding to self-harm, psychosis and suicidal ideation. Details 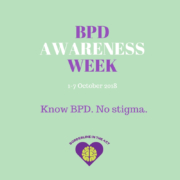 It’s time to smash taboo and talk about BPD.

Borderline personality disorder is one of the most stigmatising mental disorder – not only among the public, but also among mental health professionals.

But with the theme for this year’s BPD Awareness Week is “Know BPD. No Stigma.”, we’re being encouraged to bust some myths and get to know the facts about BPD.

Why bring attention to BPD?

BPD is a serious mental health disorder that can be highly distressing for the person affected as well as the people around them. It is estimated to affect 1-4% of the population of which three-quarters are women. Of the BPD population, 10% die by suicide.

BPD is characterised by poor self-image, fear of abandonment, suicidal thoughts, impulsive behaviour, and dramatic mood swings, so people living with the disorder usually have unstable, interpersonal relationships and may have trouble keeping a steady job. But this is all very treatable!

What’s in a name?

The term ‘borderline’ originated 80 years ago to describe people in between psychosis and neurosis when neuroses were believed to be treatable whereas psychoses were not. Those who were ‘borderline’ carried a surplus of stigmatising labels in addition to living with a mental illness, such as ‘treatment-resistant’, ‘manipulative’, ‘attention-seeking’ and ‘irrational’. Today, neurosis is no longer a relevant mental health term and BPD is not a psychotic disorder, yet the public and many service workers still associate BPD with such negative stereotypes and continue to demonise and reject people with BPD.

In fact, due to this historical stigma, as well as the classification of personality disorder seems outdated, many of today’s experts are debating to rename BPD as it is closer to a mood or identity disorder. Suggestions have included complex posttraumatic stress disorder and emotional intensity disorder.

The stigma in the name is one of the reasons why receiving an accurate diagnosis for BPD isn’t always easy. Misdiagnosis often occurs leaving individuals seeking inappropriate (and sometimes risky) treatment by medication. An early diagnosis means timely access to early intervention by psychotherapy.

BPD is highly treatable! BPD-specific treatment such as Dialectical Behavioural Therapy (DBT) is locally available in the ACT at ACT Counselling and DBT Canberra. DBT focuses on mindfulness and teaches individuals to control intense emotions, reduce self-destructive behaviours, manage distress, and have meaningful relationships. Studies have shown that nearly 85% of people with BPD experienced remission over a period of 10 years and of those, only 12% relapsed. Medication is not the main treatment as evidence has shown that medicines only provide minimal relief of BPD symptoms and does not improve other aspects of the illness.

Myth #2: People with BPD are ‘manipulative’.

Although some behaviours presented by people with BPD may seem ‘manipulative’, their behaviours are not intentionally manipulative. Their actions are often an attempt to avoid confrontation, abandonment, and/or to seek validation.

Myth #3: People with BPD are ‘attention-seeking’ and ‘irrational’.

People with BPD are highly sensitive individuals described by leading researcher on BPD, Marsha Linehan, as emotional “third-degree-burn patients”. Treatments such as DBT would help individuals with BPD to cope with their strong emotional distress and navigate situations and relationships in more appropriate ways that come more naturally to others.

For more myths and facts check out borderlineintheACT.org.au ‘Myths and Facts’ page.

For more support or more information