Development and course of BPD

You are here: Home1 / Living with BPD2 / Development and course of BPD

Development and course of BPD

According to the DSM-5, BPD can be diagnosed as early as at 12 years old if symptoms persist for at least one year. However, most diagnoses are made during late adolescence or early adulthood. The most common course of BPD is one of chronic instability in early adulthood, with episodes of serious affective and impulsive reactions leading to repeated use of emergency services at every crisis prior to BPD diagnosis. Almost 40% of people with BPD had been previously misdiagnosed with bipolar disorder. A proper diagnosis is necessary for appropriate treatment as without awareness of the BPD population in young people, it is unlikely for sufficient services to be available for early intervention and thus prevention of cyrstallisation of behaviours that can have severe consequences on functioning. 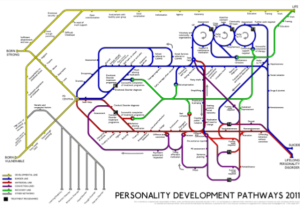 Personality development pathways 2011 by Dr Rex Haigh, UK Medical Director who was a consultant psychiatrist and member of the guideline development group for NICE CG78 on Borderline Personality Disorder. This is intended as a diagrammatic representation of theory, policy and thinking about personality disorder in 2011. It is not intended as a statement of fact.

While BPD in childhood is not yet well-researched, there is growing evidence of recognisable symptoms and traits of BPD that manifest during adolescence. As teenagers are expected to engage with the world with more independence, impairments of emotion regulation and self-control skills become more apparent during this developmental period. Self-harm, a distinctive behaviour of BPD, has been reported to be in two-thirds of BPD patients and onset is during adolescence as well as other impulsive and risk-taking behaviours.

As BPD symptoms interfere with normal developmental processes, young adults with these symptoms are at increased risk for poor adult functioning including poor social, academic and occupational outcomes. Many patients retain some BPD symptoms later in life even though they no longer met the formal diagnostic criteria. However, BPD traits have also been proven not stable during adolescence and therefore not necessarily a lifelong disorder.

Risk for development of BPD symptoms

A parent with a history of mental illness confers genetic and environmental risk for mental illness to the child. Studies have shown that first-degree family members of individuals with BPD are 4 to 20 times more likely than the general population to be at risk for BPD. As BPD share common traits with other psychiatric disorders, it is not surprising that relatives of individuals with BPD are also at increased risk for related disorders such as depression, substance use disorders and antisocial personality disorder.

Early onset of psychiatric diagnoses, including depression and substance use disorder put young people at risk for interpersonal and academic impairments and disrupts normal development for daily functioning, resulting in the emergence of personality disorder in adulthood. Interpersonal conflict and separations at a young age are also the most common cause of adolescent suicide.

As most BPD diagnoses are not made until the individual is at least 18 years old, appropriate treatment usually begins in adulthood. Studies found that most patients with BPD improve with time. After 2 years, 1/4 of patients experience a remission (less than 2 symptoms for a period of 2 months or longer) of BPD diagnosis. After 10 years, 91% achieved remission of at least 2 months and 85% achieving remission for 12 months or longer. Therefore, the course of BPD is generally positive.

When considering the course of individual BPD symptoms, studies mostly demonstrate overall reduction in all symptoms, especially symptoms relating to impulsivity and behavioural manifestations of BPD remitting quicker than emotional affective experiences. Although there is early reduction in self-harm and suicidal behaviour, the risk of completed suicide remains at 10% when patients are in their 30s and after multiple failed treatments. The overall rate of mortality in BPD is higher than the general population.

Comorbidity of other mental disorders is extremely common in individuals displaying BPD traits, in particular mood disorders, substance use disorders, anxiety disorders and eating disorders. Even after 6-year follow-up, over 60% of BPD patients met criteria for a mood disorder and similarly for anxiety disorder. Having BPD diagnosis is also linked to longer recovery time for other mental disorders and medical problems. Medical and psychiatric medication use declines during 8-year follow-up but remains relatively unchanged after that.

Currently, most specialised BPD treatments are limited to 1 to 3 years and are expensive. Some experts suggest intermittent psychotherapy approach would be better with addressing the different problems at different life stages in the diverse combination of BPD traits. For example, Dialectical Behaviour Therapy was developed to control self-harm and suicidal behaviour symptoms of BPD which are common in the early stage of patients with BPD but remit with time. So, it may be more relevant to older patients to learn to manage feelings of emptiness and fear of abandonment using a therapeutic approach that is proven most effective to the identified symptom.

Achieving recovery from BPD is defined as remission from symptoms combined with good, full-time occupational or educational functioning and at least one stable and supportive relationship with a friend or partner. Predictors of recovery include not being hospitalised, higher IQ, prior good occupational functioning, high extraversion, high agreeableness and absence of avoidant, dependent, and obsessive-compulsive personality disorders. Other factors that are linked to effective treatment are both marriage and being a parent at an older age than non-recovered individuals with BPD.

This page is a summary of The Lifetime Course of Borderline Personality Disorder (2015) by Robert S Biskin.

JOHN GUNDERSON – The course of BPD as a person ages

BPD Treatment – BPD Symptoms: Will I outgrow them?

BPD – How does BPD develop in adolescence?

BPD and the misdiagnosis of Bipolar Disorder

Borderline personality disorder in adolescents: the He-who-must-not-be-named of psychiatry

Development of Borderline Personality Disorder in Adolescence and Young Adulthood: Introduction to the Special Section