You are here: Home1 / Living with BPD2 / BPD myths and facts 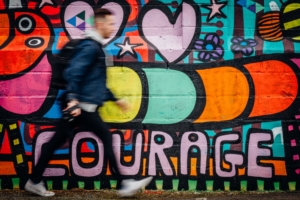 Even with increased scientifically-based evidence in today’s world about BPD, there are still lingering myths and misconceptions about the disorder. It is time to dispel these myths about BPD!

MYTH: BPD is rare
FACT: Between 1-4% of the population is estimated to have BPD diagnosis. That’s more than bipolar disorder and schizophrenia combined!

MYTH: Only women have BPD
FACT: It is true that there is currently a 3 to 1 female to male ratio in those diagnosed with BPD. Psychology theories suggest that when men display similar symptoms they may be diagnosed with antisocial personality disorder due to this myth. In addition, men and women respond different to emotional distress. Women are more likely to internalise their overwhelming feelings leading them to depression and anxiety. Whereas men tend to have more explosive temperaments and engage in impulsive behaviours to avoid emotional harm and this may explain why there is a 3 to 1 male to female ratio in antisocial personality disorder diagnoses.

MYTH: “Help-rejecting complainers”, irresponsible, fickle and egocentric
FACT: Those who suffer from BPD are genuinely suffering and do not choose to be this way. Unfortunately, many people dismiss those with BPD as manipulative, destructive, and violent. Media portrayals of people with BPD show them as violent because of strong tendencies towards angry outbursts, but this is a minute representation out of the hundreds of BPD trait combinations. When someone is consciously manipulative, they deliberately seek to control or influence another person’s behaviour to get what they want. A person with BPD is too impulsive to think things through and many of their actions are done out of desperation for help so sometimes these intentions are misunderstood and perceived as manipulative. While their reactions may look like they are premeditated, they often have no control over their emotional response and struggle to adapt to new situations and express themselves in a calm manner.

The majority of researchers agree that individuals presenting with BPD traits are unlikely to actually physically cause any harm towards others. Given the right support network of treatment and therapy, people who experience BPD symptoms can learn to manage and regulate their emotions and behaviours to improve and maintain relationships. The support network can include participation from trusting and caring family and friends who can help them better understand and communicate with someone who has BPD.

Note that we are not suggesting that people with BPD shouldn’t be held accountable for their own behaviors – they absolutely should. But it would also be a mistake to regard people who experience BPD symptoms simply as mentally healthy people who are being selfish. Having this understanding will allow people with BPD traits to feel valued that they have a legitimate clinical condition and to seek effective and appropriate help on improving their thought processes.

MYTH: “intractable” and “treatment-resistant”
FACT: Treating patients with BPD is challenging, requiring immense commitment from all stakeholders in the recovery.  It can be of substantial risk to the individual and others if the allocated treatment is inappropriate or insufficient. However, while treatment may be difficult, it does not mean that there are no treatments. In fact, there are several treatment and therapeutic strategies that have been developed and researched over the last couple of decades such as dialectical behavior therapy that has shown great efficacy.

MYTH: “emotional hypochondriacs” (attention-seeking)
FACT: One of the symptoms of BPD is self-harm and suicidal behaviours, which may be mistaken for seeking attention. These self-destructive tendencies are in fact poor coping skills to self-soothe from emotional turmoil. When a person with BPD self harms, it is usually done away from others’ views so that their cuts and scars can be hidden underneath clothing.

The emotional outbursts from people with BPD are not intended to be attention-seeking, but is their expression of intense internal feelings. They are not melodramatic however, the more they are misunderstood, the more they suffer and the greater their emotional outbursts. This is a result of dysfunctional thought processes in which the individual’s behaviour is fuelled by emotions instead of rational thoughts. Therefore, as the person with BPD experiences greater emotional instability, their coping mechanism is to behave in a way that can seem extreme, irrational and impulsive. Any expression of self-harm or suicide must therefore be taken seriously.

PsychCentral – Men can have BPD, too

Your Health in Mind BPD